Another busy week in the semester has come and gone and with that another debate! This week we debated the topic of is technology a force for equity in society. After watching both Ryan and Kaytlyn debate it out, I have to say I was glad I did not pick this topic as it was a tricky one! However, they both did a wonderful job supporting their sides of the debate! To begin I think it is important to allow my readers to ensure they know the difference between equity and equality as our class discussion also went in different directions because it is easy to confuse the two! Check out this short video to remind you of the key differences! 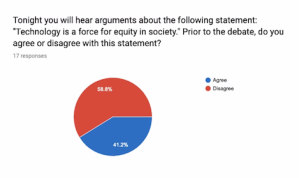 Ryan and Kaytlyn as mentioned above did wonderful jobs in supporting their side to the debate. Let’s look at what some of their arguments were:

Ryan took on the task of agreeing that yes technology is a force for equity in society. Throughout his video and with the articles he supplied to the class he gave many examples to support his side. Ryan made the point that as technology is always advancing and improving, allows for greater access and helps individuals improve their place in the world. Let’s take a look at the three main points, Ryan stated:

Along with the points that each debater stated to support their side, the class discussion also raised some very important parts that need to be considered when discussing and finding solutions to this controversial topic. Kendall asked the question of who gets a voice? The individuals who have access to these technology devices or everyone? As well as who are the individuals who are seen to need these advancements? The schools of middle and higher class students or schools of lower class families? Katia also made the point that not everything thing in schools is equitable and not everyone can participate so what does that mean for technology? Are we saying that no one should have access to the technology to make it equal? Throughout the class discussion, the point that was also raised was not all schools have the budget for these advancements, with that it goes past student to student equity but school to school and division to division. The overarching question to sum up this debate is the one Tianna stated at the end of the discussion. What barriers need to be removed to allow it to be equitable? What barriers stand in our way when looking at this specific topic? There is not just one wall in all of this, there are so many scenarios and contexts that impact the accessibility to these devices and what some believe to be equitable is not viewed the same as others.

After the class discussion, the class than needed to do the post-vote for the debate. Like many of my other classmates I changed my vote to disagree with this statement, however, after doing further research and further analysis I then again changed my perspective once again! 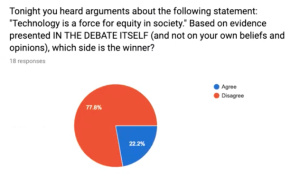 As one can see above there are so many aspects of society that need to be considered to understand if technology is a force of equity in society. I am still in between when it comes to this topic, however, with the points Ryan stated to support his argument, I agree that technology can be a force of equity in society if we see some changes in how society views equity and social constructs. Technology can support so many individuals, however, as we understand not all individuals are given the opportunity to receive these resources. However, I believe that our debate discussion led more into bigger social problems that need to be addressed such as school budgets, and other accessibilities that all individuals need to be given. Understanding that if social constructs and ideologies would change, the technology could then allow for equity. I understand that so many other factors need to be considered when discussing this topic, but if we look at technology all on its own without adding all of the other variables, I truly believe that technology is a force for equity.

4 thoughts on “Does technology move towards equity in society?”

This site uses Akismet to reduce spam. Learn how your comment data is processed.